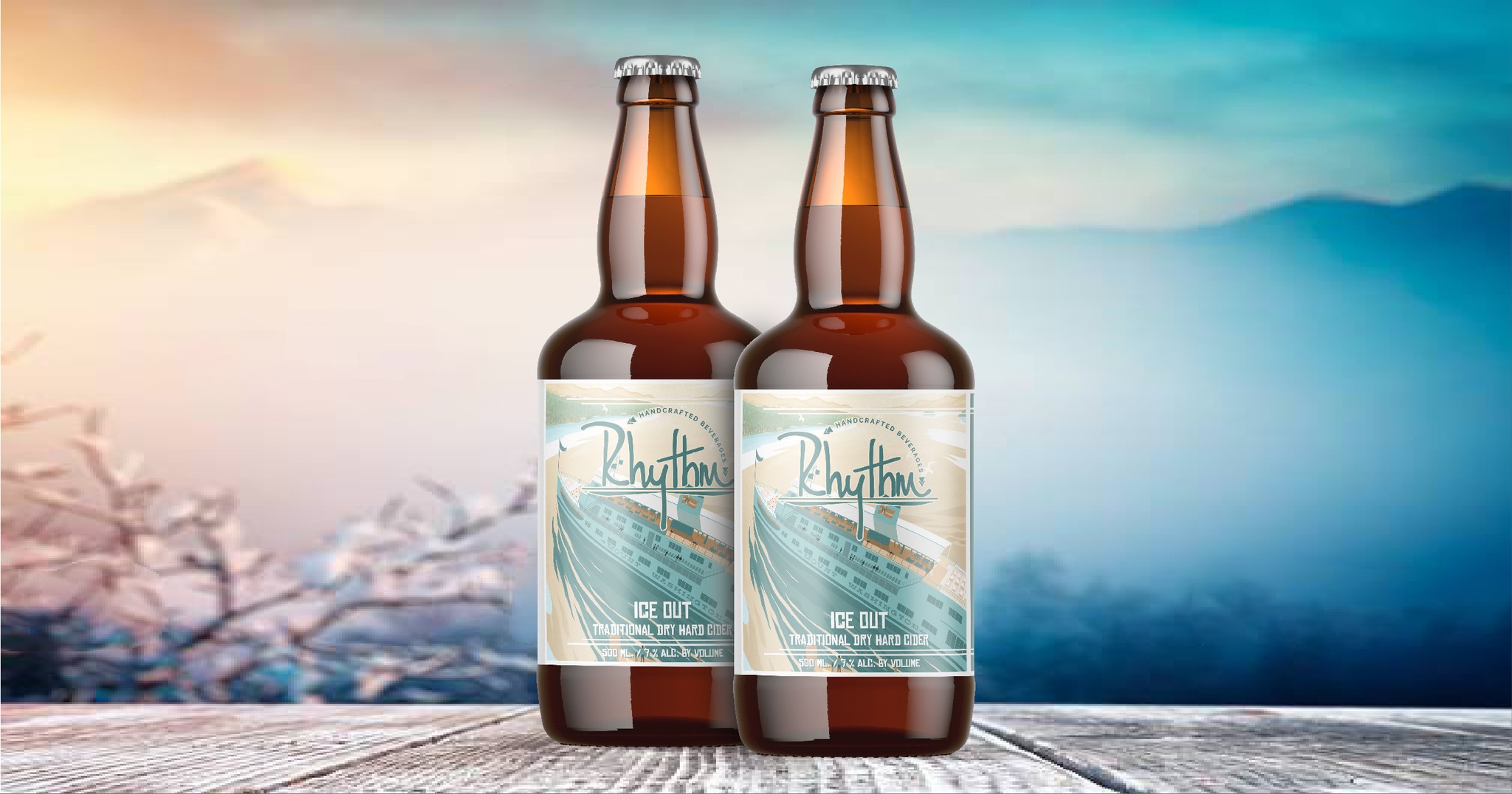 that started a new collaboration

In January of 2022, we received a phone call from Jared Maraio from the M/S Mount Washington cruise ship on Lake Winnipessaukee.  Jared explained to us how the “Mount” was looking to revise its food and beverage menus to be more inclusive of locally produced goods that could be sold and served aboard the ship.  The Mount cruises the lake all spring, summer, and fall, hosting thousands of visitors from around the world.  “Why not serve them food and drinks that are made right here in NH?” Jared commented.  We couldn’t agree more.

Jared went on to explain that last season, a local brewery provided the ship with custom printed cans sold on board and that the response was terrific.  Twin Barns Brewing from Meredith, NH had created a special brew for the M/S Mount Washington and canned the beer with artwork depicting the ship.  “Visitors were actually taking the cans home as a souvenir.”  Jared wanted to explore something similar with our Rhythm Hard Ciders.

It just so happens that this year is special.  This year marks the 150th anniversary sailing of the M/S Mount Washington.  With a storied history, coupled with this special anniversary year, there was no question, we wanted in!  We would be so honored to have our hard ciders served aboard this magnificent vessel.  We decided that we would craft a special traditional hard cider, just for this.  And, it will be the ONLY hard cider served aboard the M/S Mount Washington! 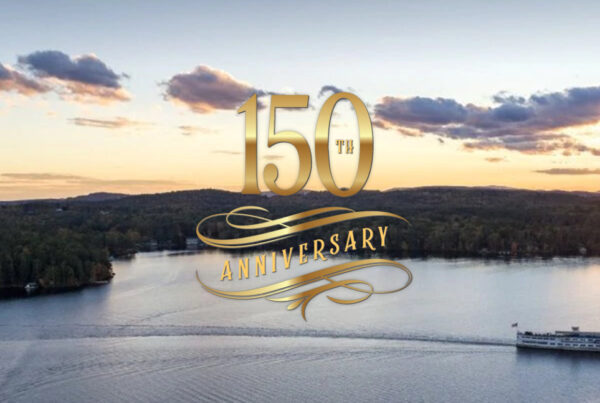 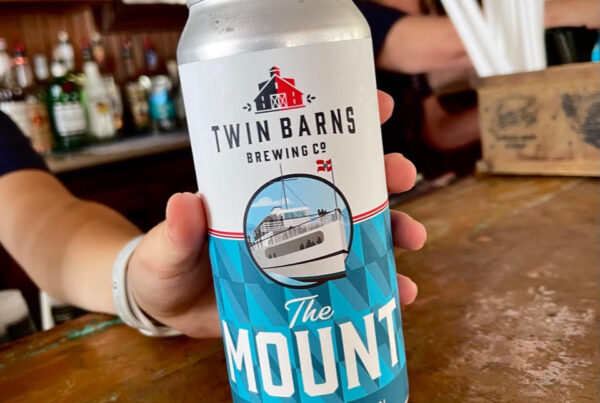 how "Ice Out" got its name

Excited at the opportunity to craft a special hard cider for the M/S Mount Washington, cider maker, Mark LaClair, went home to discuss the idea with his wife, Stephanie.  Right away,  without even further thought, Stephanie said “You should call it Ice Out.”  How fitting.  It just so happens that we are crafting cider using a method called “cryoconcentration” to  remove some of the water content and concentrate the flavors and sugars.  We are literally taking the ice out.

That’s not what Stephanie meant though.  She was referring to the annual declaration of “Ice Out” on Lake Winnipessaukee by Emerson Aviation out of Laconia, NH.  Since 1887 Ice Out has been monitored and recorded.  By definition, Ice Out occurs when the M/S Mount Washington is able to pass safely to all 5 ports on the Lake.  This year, Ice Out was declared at 5:20pm on April 8th. 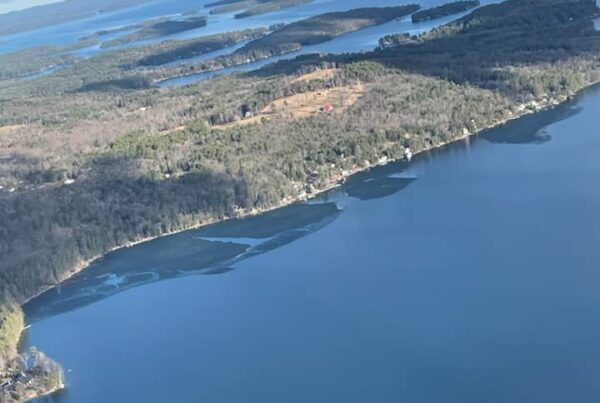 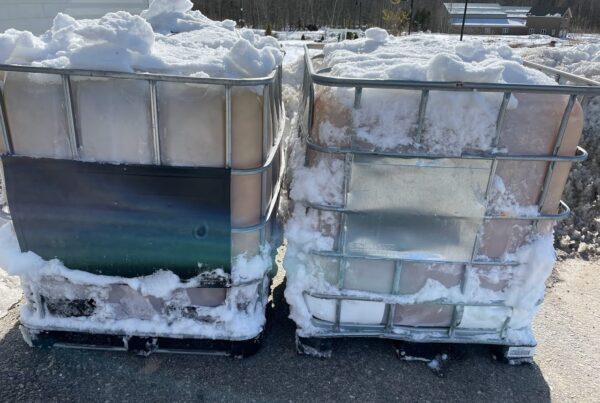 a special design needed for Ice Out

Knowing that this hard cider was going to be special, we needed to find the perfect artwork to adorn the bottles to be sold on the ship.  Calling on the expertise of Allan Guilbeault of LGA Media Group, we had the idea of finding a local artist that can create just the right thing.  The artwork needed to be “classic” and creative.  It needed to have a “summer” feeling to it, and it needed to embody the local, NH spirit, LIVE FREE.

Allan suggested that we reach out to Kat Maus of kat maus haus illustration and design to commission a piece of artwork for this special collaboration, special cider, and special anniversary year of the M/S Mount Washington.  Right away, Kat understood the charge and started drafting our design.  The resulting piece is perfect.  The light colors, the illustration of the ship and the depiction of the water, retreating ice, and mountains in the background are all exactly what we were looking for.  Bravo Kat!

Allan and the designers at LGA took the artwork, fit it into our label format and voila, ICE OUT TRADITIONAL HARD CIDER packaging is born. 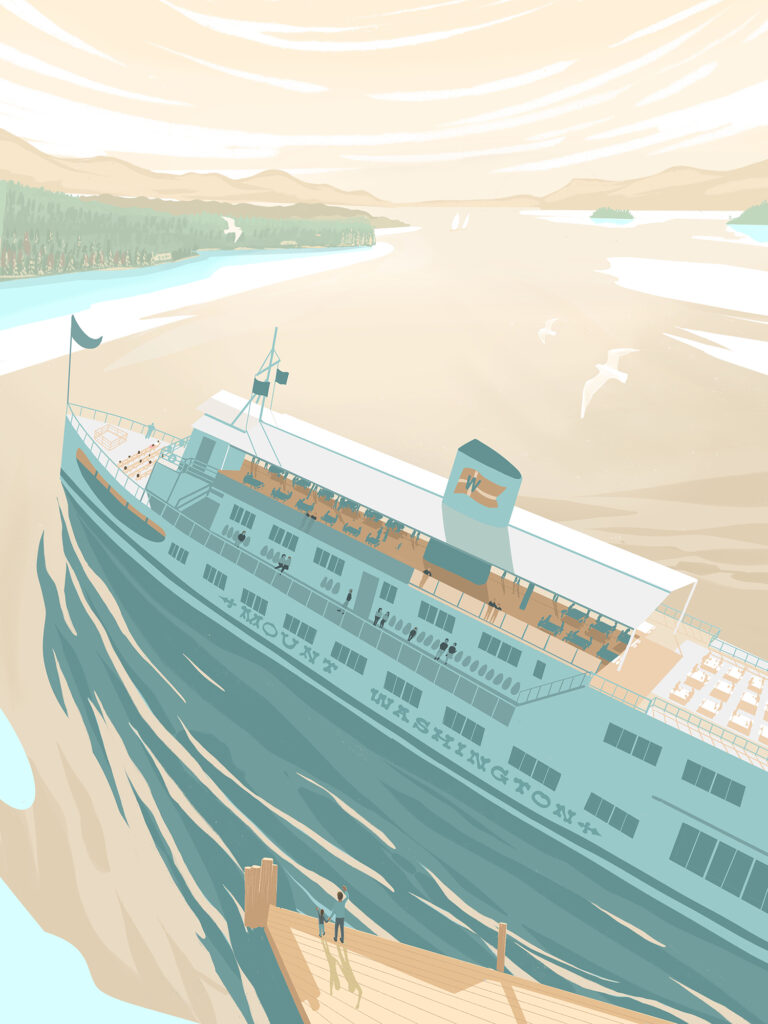 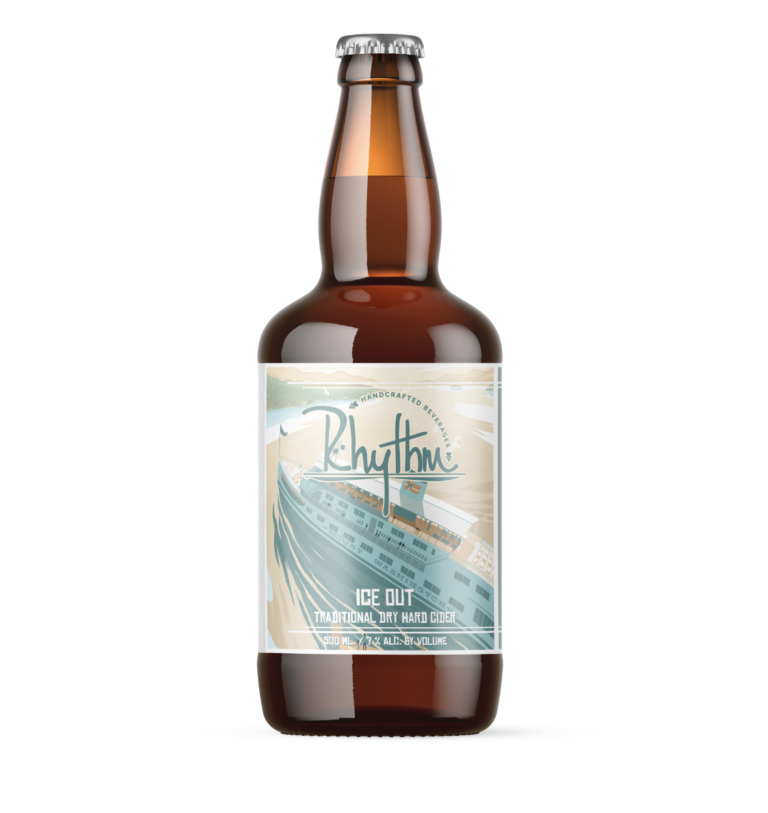 When the stars align, you know it is meant to be.  It just so happened that we were in the process of creating a traditional hard cider from apples that were harvested in the fall of 2021.  The apples from Windy Ridge Orchard (where the winery started in 2010) were pressed in the fall into food grade totes and put outside for the winter.  These 275 gallon totes of apple juice were frozen solid.  Then, over the winter, the sweet cider was brought into the winery (Seven Birches Winery) to thaw and to start fermentation.  Yes, our goal was to get the ice out.

When sweet cider is frozen, then thawed, the sweet sugary juice melts faster than the water ice does.  This allows us to separate the sweet concentrated apple juice from the ice water, in a process called cryoconcentration.  We use the concentrated sweet cider to make our traditional hard cider.  Ice Cider, as it is sometimes called, is made when the apples are left to freeze on the trees in the winter, before they are pressed.  Similar idea.  The resulting hard cider is highly concentrated, dry (not sweet), at around 7% alcohol by volume.  This refreshing hard apple cider will be a big hit during the hot summer months aboard the Mount. 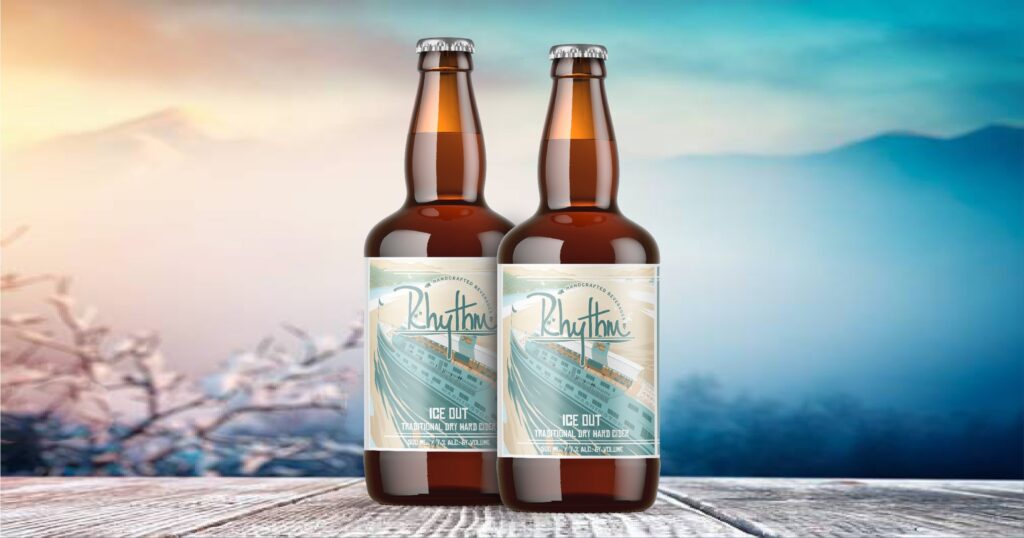